On Friday, Brittany from our Bloomington office was able to take Madison and Marie out to meet one of our clients, Trish. Trish is so full of life! She is an inspiring woman for many different reasons, but what stands out the most is she finds the positive n any situation. Her caregiver was the winner of their “cold weather appreciation” raffle, so we took this opportunity to talk to Trish and have her share her story with us.

Trish started with Adaptive in April of 2016 and stated she has been a different person since. When she was choosing which company to go with it was a no brainer for her. Before starting with Adaptive she was at low point in life; she had just lost her home, car, and had to move to a place that she said just wasn’t her. During this time she stated she felt all sort of different emotions such as shame, guilt, sadness, and insecurities/envy. She didn’t understand how everything she once had was gone so quickly. Losing her independence and having to rely on others was the hardest part for her she stated. She said it took a long time to remember her self-worth and the person she used to be, which she praises Adaptive for helping her with that. 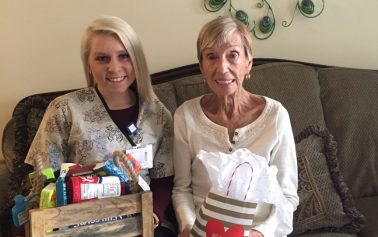 She was in bad shape when starting with Adaptive- she said she was sick, upset, and had little energy. One day she heard a knock at the door and in walked the sweetest soul, who happened to be Clinical Manager, Stephanie Dye.  Due to it being the first time they had ever met, Trish felt embarrassed to tell Stephanie that she needed help making it to bed. Stephanie immediately put her  things down, helped her get comfortable in bed and got her everything she needed.  She went on to tell us with a laugh that she has never been treated so well by any other nurse in her lifetime that she woke up the next day and thought she imagined Stephanie in her head. She said a few weeks later Steph came back to do her start of care and she was so happy she cried tears of joy. She says, “Stephanie is her hero and gave her a second chance at being the woman she used to be.” After that day she told us she came up with her favorite slogan  she loves to tell all the residents living near her “have no fear, Adaptive is here”!

When asked about her caregiver, Kenna, she bursted into tears and says she calls all of her girls her “Adaptive Angels”. The office has had other residents on her floor call and ask our office if we could send them one of our angels as well. Trish went on to say that her favorite part about Adaptive is that we stand by what we say. We truly believe in positively impacting others in a way that changes their life forever. Trish stated that she will never be able to repay everyone that works for Adaptive and thanked us for making her feel calm, safe, and secure again. She said she is finally back to her old self. She wanted everyone to remember that even during the dark times in life there’s always going to be sunshine in the future. Onn the days that she cant ever seem to find the sunshine, she calls her “angels at the office” because Adaptive is her sunshine.

Adaptive is always hiring the best!